An update on the Portuguese energy market and its challenges.

Background
The low voltage grid is the part of the grid that leads directly to the consumption locations. In Portuguese mainland the low voltage grid stretches across 108.938 km above ground and 33.389 km underground. It also includes 67.063 transmitters. The role of the Operators of the Distribution Grid (“Operators”) consists in managing the network (delivering the necessary power to the requested places) by developing and maintaining the existing infrastructures.

In the last decades Energias de Portugal, S.A. (“EDP”) has dominated the Portuguese medium and low voltage grids. There are currently eleven operators with unequal market shares in Portugal. In 2016 EDP Distribuição controlled the market by holding 99.5% of the market share and 6.099.905 clients. The other ten operators, together, hold 0.5% of the market share with 30.000 clients. They are small local communities organized as cooperatives that only operate in individual municipalities or autonomous regions (Azores and Madeira).

The new tenders’ conditions
Decree-law 29/2006 of 15th February (the “Energy Law“) establishes that the new concessions shall result from various public tenders in Portuguese mainland which must occur in a synchronized manner during 2019. To determine the operators’ remuneration, ERSE shall analyze all operational costs of the distributors as well as the required investments to create an efficient market. As a result of this analysis ERSE shall establish the allowed revenues of each concessionaire until 15th December of each year. Performance and service level will influence the concessionaires’ profits.

On the other hand, concessionaires are to pay an annual rent to the municipalities, which own the distribution rights; the rent will take into consideration the number of electricity consumers determined annually. The unbundling of the energy market forbids companies that operate in other areas of the sector (with at least 10.000 clients) to bid to these tenders.

Concessions’ size matters
The criteria for the selection of the new concessionaires will be detailed in the tender programs. However, it is certain that it will involve both technical and economic factors. According to ERSE’s proposal of 21st January 2019 (“ERSE’s Proposal”), the main criteria shall be:

The first three criteria mentioned above will work as excluding factors and the last one will be decisive for the choice of the tenderer. This additional rent, however, must not fall on the consumers, being supported in full by the new operators. The criteria for each concession shall include homogeneity of dimension, costs and standard deviation of the efficiency scores.

Law n.º 31/2017 31st of May (the “CIM Law”) establishes that the basis of the divisions for the purposes of the concession of energy distribution networks should be the intermunicipal communities (comunidades intermunicipais) known as “CIM”. However, ERSE considered that the 23 CIM in mainland Portugal cannot provide the similarity of the referred criteria, due to the significant differences within each of them.

After a public consultation ERSE made a proposal on 21st January 2019: a division of the Portuguese mainland in three different territories by grouping CIMs in the north, center and south. No deadline for the response of the municipalities to ERSE’s proposal has been set, but the next steps of the process leading to the tenders are in the hands of the municipalities: 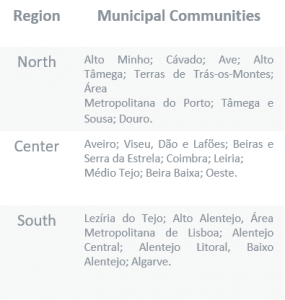 Anticipating the future
Despite the fact that the new tenders present a unique opportunity for investors, there are some relevant issues to prepare in advance in order to succeed, such as  obligations passed on from the previous operators that will burden the winning bids. One growing concern amongst potential investors regards the possible indemnities that would have to be paid by municipalities or new concessionaries to EDP, due to the investments made by that company in infrastructures over the years. Also, a strong investment in the grid shall be required from the new operators to modernize it and to face new challenges, such as

The number of public tenders is a decisive factor for their results. It is likely that ERSE’s proposal may suffer several changes, as it was criticized by the Portuguese government and different municipalities. Although the number of bidders will depend on the tender conditions which have not been announced yet, the competitiveness of potential participants is ferocious and has already started in the discussion of the tender structure.

On one hand, though they are very low weight players, small operators developed technical capabilities over the years and may aspire to expand to new areas: they need a fragmented tender process. On the other hand, big players (like Iberdrola and Endesa, operators of the Spanish distribution network already present in Portugal in the area of energy production and commercialization) are considering the participation in the Portuguese tenders for larger areas.

In the end, large size concessions and the ability to pay an additional rent (diminishing the profit margins of the operators), benefits the players with better financial conditions. And these players, national or international, experienced or not, will, most certainly, prevail in the public tenders against smaller players. EDP has the know-how resulting from years of experience as the main medium and low voltage grid operator in Portugal. That reason is enough to place EDP as the candidate with better conditions to successfully bid for in the largest tenders. Hopefully, tender conditions will be established in a manner that attacks other bidders and allows effective competition.

Macedo Vitorino & Associados is a leading Portuguese law firm. We advise domestic and foreign clients in a wide range of business sectors, including banking, distribution, industry, energy, TMT and projects. We are known for our professional and client oriented approach to complex and difficult matters.

If you want to find out more about Macedo Vitorino & Associados please visit our website at www.macedovitorino.com